It all started at a gas station in Råda

Our company has an interesting history. Over 30 years ago, Jan Åslund, one of our two owners, along with then-partner Rolf Bengtsson, bought a ramshackle old gas station in Råda outside Hagfors. At first, the plan was to use the gas station for different types of hobby projects. It wasn’t long, however, before the building began to be used for welding and minor repairs for local clients.

A few years later, Krister Axelsson, Autofric’s other owner, joined the group. Krister, Krister, with his practical experience from the car- and motorcycle construction, manufactured the first machines used in water treatment plants. Together with the end customer was a prototype developed which was so successful that it became the start of the thriving business we see today.

In the early 1990s, it was decided to include screws in the presses Autofric supplied to the treatment plant. There were no machines like this on the market, though, so Autofric designed and built their own. Developing a working machine took six long years. But the project was a success, and the resulting machines are still used today.

With its own machinery, the business grew rapidly and the converted petrol station soon became too small. In 2003, we reached our maximum capacity and the company moved to the current premises in Hagfors.

Growth has continued since then and in 2008 Autofric was awarded Dagens Industri's growth prize, Gasellen.

The premises have been gradually modernized and expanded to accommodate the expansion of recent years. A first stage was completed in 2011, with 800 square metres of new production area. The second stage was completed in 2020, when the workshop parts were expanded again and the facility was supplemented with a new storage facility. A new nitrogen plant was also installed the same year.

The processes and our machine park have been gradually renewed in order to meet new customer requirements.

In 2014, we invested in a new CNC-controlled press brake. Two years later, our cutting capacity was supplemented with a new plant for water cutting. Our latest investment, a complete line for laser cutting, was completed in the autumn of 2019. 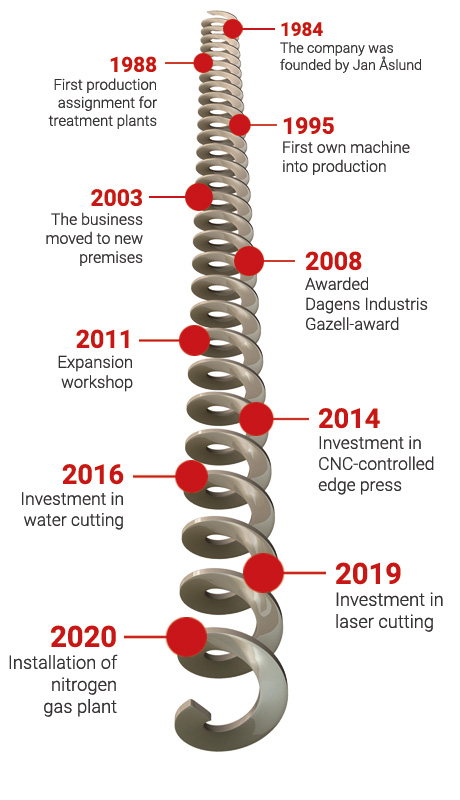